Given above is the query which will be explained in the blog below, continue reading for further details. 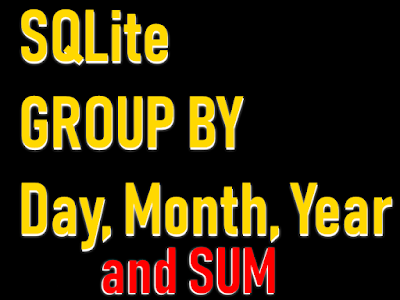 I have a database table that contains a few fields like transaction date which is a string representing date time, transaction amount, and transaction status in a SQLite database present on an Android device. The SQL Lite database contains a table named "trx_log", the table has fields _id int, trxDateTime text, trxTargetNumber text, trxAmount number, trxStatus text. A graphical representation of the table structure is given below:

How to calculate the sum of all transactions that took place in the year 2014? What is the SQLite query for group by results by year and calculating a sum? We are going to use SQLite aggregate function SUM in and combine it with GROUP BY Clause.


First we have the SELECT keyword as usual. After that I have used SQLite strftime function along with format string '%Y' . As a result, the SQLite query returns '2014' in result set column named valYear which is used in the WHERE clause of the query and GROUP BY clause of the query as well.

SQLLite Query Sum and Group By Month and Year

Now suppose I want to calculate the SUM total of all the transactions which took place in all months of 2014 (or any other given year for that matter)and show those as a column in the query results. The SUM aggregate function of SQLite and a slightly different where clause and GROUP BY will be used in our Sequel(SQL) query in this case.

Please note that the data set returned by this SQLLite against this SQL query will have two result set data columns valMonth and valTotalMonth, the column valMonth will have the numeric values from 01 to 12.
You can see that the database engine is going to filter the data first based on the criteria specified in the WHERE clause and then it is going to apply the GROUP BY operation to put data in nice groups based on the data table column name specified in the query.


SQLLite Query SUM and GROUP BY Day, Month, and Year

Next up we got a query to calculate the SUM of transactions that took place in a month say February which will be represented by string '02' in SQLite, further more we want to group the sums or totals by day. This will show how many transactions happened on day 01 how many on day 02 and so on. The query for the task is given below.

SQLite does not sport a separate date time data type(on time of this writing), you must store the date time related data in one of two formats, first is the date string format which is:

Second is plain NUMERIC field type storing stuff in Unix timestamps. Be careful when you're calculating timestamps using Android or Desktop Java Date.getDate() method call. Its representing the timestamps in millisecond. You'll have to divide the figure by 1000 before performing any calculation on it.

Use the method SQLiteDatabase.rawQuery to execute these queries on your SQLite database.

SQLite is such a popular in memory database, it's being used on both Apple iOS and Google Android devices.