We must have a sound understanding of a few networking concepts before we start writing a network application’s code. We’ll start with the term Host.


A host is basically a fancy term for any computing device connected to a computer network.
This machine can be a laptop, a smartphone, your home router, Amazon Alexa, or a server running in the cloud.
A machine is called a host for a reason.
It is called a host because "it is hosting a software which can communicate over the network".

Every host on a network is accessible through a unique address within that network.
This address is called Internet Protocol Address or IP Address for short.

A few example of an IP address are given below. It is written in dotted decimal notation.
We’ll learn more about the IP address in the next video.

In this video, I’ll explain what is an IP address. IP Stands for Internet Protocol.
V is for version.

At present IP V4 is the most widespread IP protocol.
Another version of IP speification is IP V6 and it is catching up these days.
An IP V4 address is a group of 4 separate 8 bit numbers.
The total length of the IP Address is 32 bits.
An individual number inside the IP Address can have a value between 0 and 255
When printing an IP address, the four numbers are separated by a dot to make reading it easier.
This method of printing the IP address is called the dotted decimal notation.
In many cases, a host name is used instead of an IP address.
A host name gets translated into an IP address by a Domain Name Server a.k.a DNS.

In order to understand port numbers, we will use an analogy.
Let’s consider that your PC is like an apartment building.
This building can be reached through a specific street address.
In case of a PC, it will be the IP address.
This building is further divided into apartments where every apartment is identified by a unique apartment number. 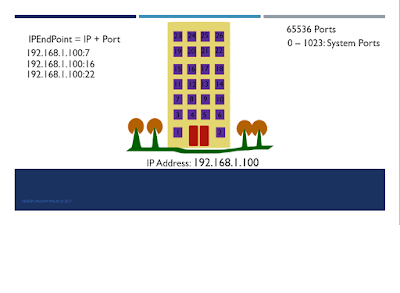 This apartment number is similar to the port number.
The computer contains a large but finite number of ports.
Each apartment in this building is occupied by only one thread or process.
Only one thread or process can use a port number to send or receive data.
When we need to send data to a specific thread or process, we need to know which port number is being used by it.
We also need to know the IP address of the PC on which the thread or the process is running.
The combination of an IP address and a port number is known as an EndPoint.
A few examples are shown on the screen.
There are total 65536 ports on a computer.
Port numbers from 0 to 1023 are reserved for operating system usage.
You can say these apartments are occupied by the building administration.
These are called well known ports or system ports.
A few example are port 20 is used for FTP(File Transfer Protocol).
Port 23 for telnet, and port 25 for emails using SMTP(Simple Mail Transfer Protocol).
And port 53 for DNS(Domain Name Server).

You don't need to learn C to work on this course.

https://www.udemy.com/tcpip-socket-programming-for-coders-using-csharp-net/?couponCode=HALF
Posted by Naeem Malik at 1:54 AM