Use Cocos2D-x Actions & Sequence for animation and callback lambda functions 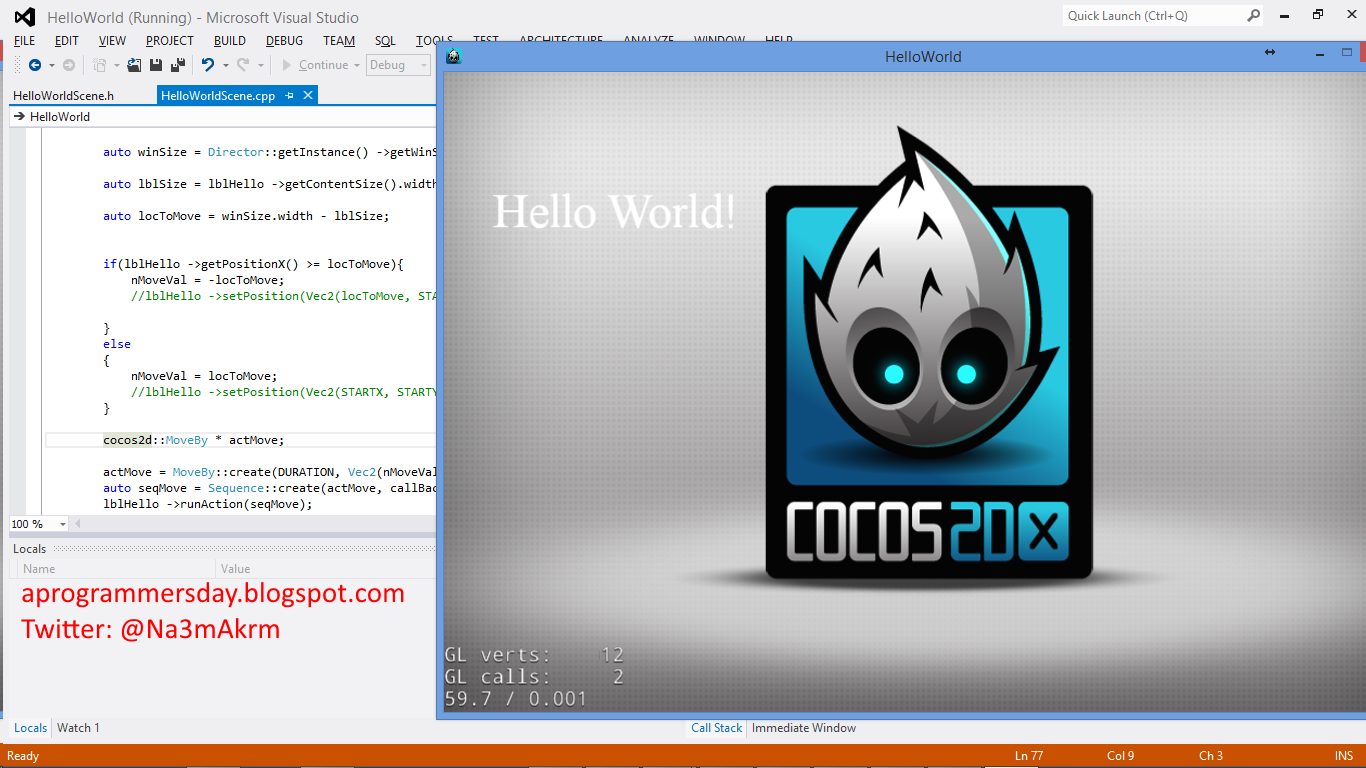 In this post I will show you how to create an animation using Cocos2D-X Actions and Sequences. I
will also show you how to use lambda functions to repeat an action.
Create a new Cocos2D-X project, as shown here.
Now go to HelloWorld::init method inside HelloWorldScene.cpp file.

Right before the function, define constants for starting point where our label "Hello World!" will be shown later.


Now find the location in the automatically generated code where main scene is being added to root node. Example is shown below


We will add a text label on screen, code is


We created a new label with text "Hello World!", font is Times, size 48, set the location to STARTX STARTY.

Next we add this label to the root node as a child on top of everything else that was there(see the number 1).
Compile, build, and run the code. It should work fine and display a label on screen.

An action is an instruction for Cocos2D-X engine to do something over a given span of time. For example, move an object from point x, y to x+10, y in 2 seconds.


We have used the width of the window and the label to calculate how many pixels will our label need to move in order to fly to the right end of the window.
Director is the grand daddy of everything inside a Cocos2D-x game.

To make it fly, we will create an object of Action as illustrated below


I have defined the constant DURATION earlier, it is a float type and represents the speed of animation in seconds.


This action can be run by calling appropriate method on lblHello, as shown below


Try to build and run your code, you'll see the label will fly from left to right most corner and stop.

A sequence as the name implies is a set of actions performed on an object one after another. An example of sequence will be


An example of this behavior with the label which we created earlier is given below:

I'm intentionally repeating some of the code since I believe people tend to zoom straight in to the code, without any idea about the context. I personally discourage copy/paste programmers but still they are brothers in code at some level.

Now build and run this code. You will see the text label hello world fly from left to right edge of screen, it will then grow to double its size. The label will go outside the screen, but don't worry about that yet.

Spawn is yet another construct to group more than one actions, these actions are performed on an object in parallel. For example if you want the label to move right and grow big at same tie. Try following lines instead of seqMoveAndGrow.


Build and run your code now. You will see spawn in action. I highly recommend you to write code alongside reading this article, that will keep you interest level up and fortify the learning as well.

The lambda function will be defined as a member variable in HelloWorld class.
Open the corresponding header file HelloWorld.h
Right before the ending bracket of class HelloWorld, add following code

Assign a value to lambda function

Now let's open the file HelloWorld.cpp and inside init() function go to line after where you added the label to root node, I mean this line


Important: We have the lambda function ready to be fired, but it won't do anything until we pull the trigger somewhere.
In order to do so, we will use a sequence. Where the label will move to right, our callback lambda function will be fired and the label will move back to left. Same behavior will keep repeating again and again. The code for this operation is given below:


Build and run to see the label running around for you.
There could have been a fighter jet here, but that would make things little complicated.
I will post more simple and easy to use articles so that you can understand how games work, what are sprites, and collisions etc.

Assignment:
Try to move the label in a box formation. Left to right, then bottom right, then back left bottom, and up to the starting point again. Code in lambda function will be changed to do so.

Video of the code in action will be posted soon.